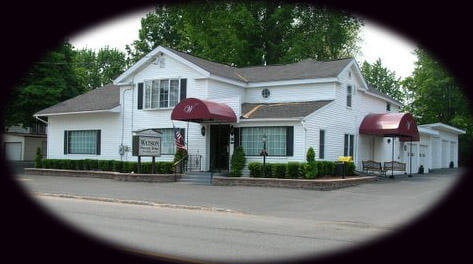 The Watson Funeral Home is a family owned and operated independent business that was founded in 1929 by the late Arthur Watson and operated by he and his wife, Lillian, until they retired in 1959.   Ernest Ladd Jr. purchased the firm in 1962 and operated the funeral home until his retirement in 1992.

Ernest Ladd III then took over the family business and operated it along with his wife Jean, son, Ernest 'Chip' Ladd IV, and licensed funeral director and son in law, Ronald Naum.

The Traub family has been serving the Central Square and surrounding communities for over 160 years.  Now, combined with the Watson Funeral Home's tradition of service, both locations will be able to provide quality affordable service for years to come.

Watson Funeral Home provides every option for either burial or cremation, tailoring each service to honor the loved one that has passed.

Directly order flowers, view and sign the condolences book, share memories and more to celebrate lives of those dearly missed.

Helpful resources to guide you through the loss of a loved one.

Take a few moments to express your wishes now and help to ease the burden on your loved ones.

A collection of answers to questions that people often have when arranging for a funeral.